World Fish Migration Day 2014 (WFMD), which takes place on Saturday, 24th May 2014, is a one day global initiative, with local events worldwide, to create awareness on the importance of open rivers and migratory fish. WFMD is held to improve the publics’ understanding of the importance of open rivers and migratory fish and their needs. The ability of fish to freely migrate is crucial to achieve healthy fish stocks. While most fish are migratory to some degree, some species like those found in the Lower Shannon, Atlantic salmon, trout, sea lamprey and eel migrate thousands of kilometers to complete their life cycles. If they can’t migrate, the population will die out. This has already happened with many species in different places around the world where barriers such as weirs, dams and sluices, built for water management, hydropower and land drainage, prevent fish from completing their life cycle. 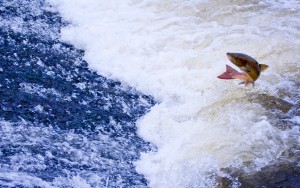 In an Irish context, MulkearLIFE / Inland Fisheries Ireland will host an event to highlight the importance of fish migration on the Lower Shannon Special Area of Conservation with a particular focus on the Mulkear River Catchment. In marking Word Fish Migration Day, the event will highlight the importance of Atlantic Salmon and Sea Lamprey migration. The event will be focused on the first man made barrier to the upward migration of Atlantic Salmon and Sea Lamprey on the Mulkear River, namely Annacotty weir. The Mulkear River, and the wider catchment, forms part of the Lower Shannon Special Area of Conservation and is the focus of the EU funded, MulkearLIFE project.

Two events will take place on Saturday 24th May 2014. The first an early morning event, which is dependent on river conditions and the presence of sea lamprey in the system, will kick off at 06.00hrs and end at 08.00hrs. it will focus on a live demonstration of Sea Lamprey successfully ascending MulkearLIFE’s specifically designed sea lamprey passes on Annacotty. The meeting point is the car park area of the Mill Bar, Annacotty, Co. Limerick. The second event of the day will commence at 12 mid-day and the meeting point will once again be the car park area of the Mill Bar, Annacotty Co Limerick. The mid-day event will have a particular emphasis on children and helping them to enhance their understanding of the importance of fish migration and healthy river ecosystems. The event will highlight the work of MulkearLIFE /IFI and our project partners over the past five years. It will include an overview of MulkearLIFE’s work to improve sea lamprey passage at barriers on the Lower Mulkear River and the project’s work to open up fish passage to over 180km of additional habitat. The event to mark Word Fish Migration Day at Annacotty will include family fun, face painting and various prizes will be awarded for the best fish costumes. The event will include a live fish demonstration of the various life stages of the Atlantic Salmon, a discussion of healthy river ecosystems and an excursion to Ballyclogh weir on the Lower Mulkear River where the weir was partially removed in 2013 to improve Atlantic Salmon and Sea Lamprey migration. Both events are free and open to the public – all are welcome.

It is expected that these events, which are being organised locally under the umbrella of WFMD, will help create awareness about open rivers and free fish migration routes. The event on the Mulkear River is but one of almost 250 events around the world on WFMD; starting in New Zealand, following the sun and ending as the sun sets on Hawaii. The WFMD will bring global attention for the need for open rivers and free routes for fish migration. It will deliver international press coverage and new fish migration awareness initiatives. The global event will be summarized in a visual presentation with the number of locations, number of participants, photo’s, films, etc, presented to politicians and high-level officers of the European Parliament and to others.