The Minister of State with Responsibility for Natural Resources, Fergus O’ Dowd T.D. today warmly welcomed the findings of a new national economic study which has revealed for the first time that angling and angling tourism in Ireland is generating a dividend in excess of €0.75 billion within the Irish economy every year.

The study, commissioned by Inland Fisheries Ireland, shows direct spending on angling in Ireland amounted to €555 million in 2012, with indirect spending worth an additional €200 million and totaling €755 million.  Recreational angling was also found to directly support 10,000 existing Irish jobs, many of which are located in the most peripheral and rural parts of the Irish countryside and along our coastline. 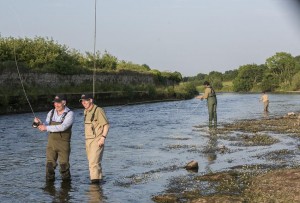 The Study found that 406,000 people were involved in recreational angling in Ireland last year, with over 150,000 of these travelling from Northern Ireland and overseas. Over a quarter of a million Irish adults (252,000) held a fishing rod last year with sea angling along with salmon and brown trout angling seen as the most popular categories where domestic anglers are concerned. The quality of the Irish angling product, the friendliness and hospitality of the Irish people and our outstanding scenery were cited amongst the principal attractions of Ireland as an international destination for recreational angling. Tourism angling spend is estimated at approximately €280 million on an annual basis.

Speaking at the launch of the Study entitled Socio-Economic Study of Recreational Angling in Ireland in the Royal College of Physicians in Kildare Street, the Minister admitted that the findings had come as a surprise, as this was the first national survey which was able to put a value on angling to the Economy and that up till now the economic significance of the sector had been greatly under-estimated.  He said the Study not only highlighted to him the major economic impact that angling makes to the Irish economy, but it also underlined the need to continue to protect and nurture this valuable resource, if it is to be allowed to develop and grow to achieve its full potential.

“The results contained in this report are significant” stated Minister O’ Dowd. “Angling, as a recreational pursuit, is a major contributor to the fabric of Irish life in all parts of the country, particularly in rural and peripheral areas. From the industry perspective, the strategic development and marketing of our angling product is essential and has been given new impetus in light of what we now know about the visiting and spending patterns of anglers and what is important in drawing them here. It is equally clear to me that maintaining a strong focus on the protection and conservation of this vital resource into the future, is absolutely key if we are to properly sustain and grow these benefits to anglers, angling businesses and the Irish economy.”

The study, which was commissioned by Inland Fisheries Ireland in early 2012 and undertaken by consultants Tourism Development International, was undertaken to help underpin effective strategic planning and decision making in respect of the angling product’s development and marketing.

The following areas are covered in the study:

Speaking at the launch, CEO of IFI Dr Ciaran Byrne commented “IFI will now review the results of the survey in conjunction with our stakeholders. Clearly fish stocks and fish habitat must be conserved, protected and developed. Angling businesses must be given every opportunity to win business and secure and grow the jobs within the sector. IFI is committed to these goals and together with our stakeholders and the support of Government, state agencies and a new angling marketing and development plan we will achieve them.”

The study can be downloaded from www.fisheriesireland.ie/AnglingStudy2013.

← Countdown to the Mirror Dinghy World Sailing Championships at Lough Derg Yacht Club 27th July – August 2nd 2013
Are you out of your depth when it comes to staying safe? →