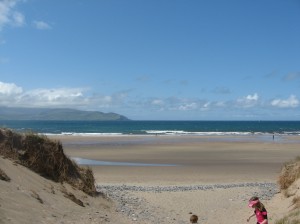 4th April 2016:
“Despite a cool and, at times, wet and windy summer, the overall quality of Ireland’s bathing waters continues to be extremely good with the stricter standards providing a high level of protection for bathers,”
said Dr Matt Crowe, Director of the EPA’s Office of Evidence and Assessment when launching the Environmental Protection Agency (EPA) report Bathing Water Quality in Ireland – A Report for the Year 2015.

Dr Crowe continued,
“Disappointingly, six bathing waters were classed as ‘Poor’ quality.  Four of these, Youghal Front Strand, Duncannon, Rush South beach, and Ballyloughane, were first classified as ‘Poor’ in 2014. All showed marked improvements in quality in 2015 but the 4 year assessment means their classification is influenced by poorer results from 2012-2014 bathing seasons. The relevant local authorities, in conjunction with Irish Water, have management plans in place to tackle the main pollution risks at these beaches and these plans are designed to return these beaches to at least ‘Sufficient’ quality in the next year or two”.

The 137 identified bathing waters are coastal or inland waters widely used by the public for bathing which are monitored, managed and assessed under the requirements of the 2008 Bathing Water Quality Regulations.

Peter Webster, EPA Senior Scientific Officer said,
“Ireland has many lovely beaches with excellent water quality. In addition to the 137 EU identified bathing waters assessed in this report, we have also included details of other waters where bathing occurs which are monitored by local authorities. While they do not come under the legal framework of the Bathing Water Regulations it is important to let the public know about their quality and we would like to see many of them included in the national programme in the future.”

Commenting on the ‘Poor’ quality waters Mr Webster said;
“Ardmore and Clifden were classified as ‘Poor’ in 2014 but showed significant improvements in 2015 due to investment in sewage infrastructure. While it is too early to say how Clifden will fair in the long term it is very encouraging that all of the samples taken in 2015 were of ‘Excellent’ quality.  At Lilliput (L. Ennel) a pollution pressure has been removed by the off-site treatment of wastewater.
Both Duncannon and Youghal Front Strand showed very good performance in 2015 and could reasonably be expected to meet at least ‘sufficient’ standard in 2016.

Disappointingly, two bathing waters were newly classified as ‘Poor’ in 2015 – Merrion Strand and Loughshinny. In the case of Merrion Strand the problem is complex and has been developing for several years with impacts from nearby streams and from an increasing number of seabirds causing microbiological pollution.  In the case of Loughshinny, a single sample taken in 2014 after very heavy rainfall coupled with slightly poorer quality in 2015 caused it to fail the standard.”

Asked whether or not it was safe to bathe at these sites Mr. Webster said;
“The fact that any bathing water has been classified as ‘Poor’ means that there is a risk of periodic microbiological pollution. Under the Bathing Water Regulations, local authorities are required to put in place notifications for the entire bathing season advising the public against bathing which could include a bathing prohibition if a serious pollution incident occurs.

Throughout the season, current water quality information and details of any incidents affecting bathing waters is displayed on the national bathing water website, Splash, splash.epa.ie.  Bathers visiting these waters are advised to check the website and their local beach notice boards for information on current water quality.  We have also set up a Twitter notification service, @EPABathingWater, to provide incident alerts and information of interest to bathers.”

The summary report Bathing Water Quality in Ireland – A Report for the Year 2015  and map of the quality of Ireland’s bathing water sites are now available on the EPA website.

Bathing season: The bathing season in Ireland, is designated as being from 1st June to 15Th September.

Assessment: From 2014 onwards bathing water compliance requires assessments to be undertaken using a statistical methodology using data covering a four year period as opposed to previous annual assessments based on percentage compliance. The new standards are approximately twice as strict as previous ones.

Classification: Bathing areas are currently classified in one of four categories namely ‘Excellent’, ‘Good’, ‘Sufficient’ or ‘Poor’.  The mandatory requirement is for ‘Sufficient’ quality.  Any waters graded as ‘Poor’ require that management measures be put in place to identify and eliminate the sources of pollution. Where waters have shown a significant improvement but have fewer than 16 samples post-change they can be classed as ‘Changes’ until sufficient results are available for full classification.