More than 150 young sailors with hopes of Olympic glory will get the chance to take the first steps towards fulfilling their dreams at the Irish Sailing Youth National Championships at the Royal Cork Yacht Club, Crosshaven, later this month.

The competition is the one time every year when the best of Irish youth sailing come together to test their skills and ability to perform under intense competition conditions – with the added pressure of being under the spotlight for the selectors from Irish Sailing Performance.

The youngsters from throughout Ireland will compete across five different classes of boat during the weekend – the Laser Radial, Laser 4.7, 420, Topper and Optimist. These five classes have been identified as those that develop the necessary experience sailors need to successfully develop their skills from junior through to the Olympic classes and competing internationally.

As well as racing, there are three evening talks from members of the Irish Sailing Team. Those attending will be treated to inspirational talks from Katie Tingle, who now partners Olympic silver medallist Annalise Murphy in the 49erFX as they seek Olympic qualification this year; 49er sailor Séafra Guilfoyle, a silver medallist at the 2014 Youth World Championships and current partner of Ryan Seaton, who was a finalist at the Olympic Games in London 2012, and Rio 2016; and James O’Callaghan, Irish Sailing’s Performance Director, who will discuss resetting and refocusing during competition with Jessie Barr, Olympic athlete and Sport Ireland sports psychologist. 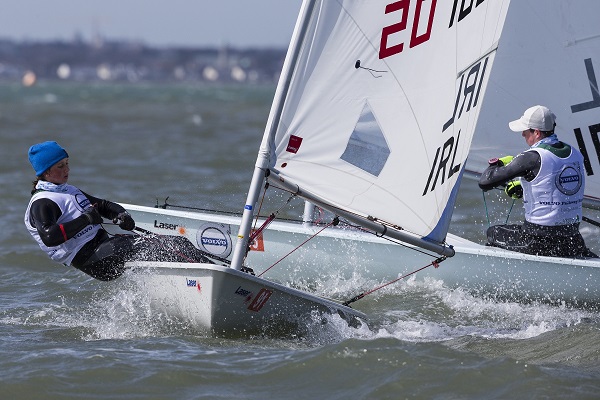 The occasion also is one of the few times where families and friends competing in the different classes can gather together in one location to share their experiences, learning and generally have some fun.

Sean Evans, Irish Sailing’s Olympic Laser Radial Academy Coach said “The Irish Sailing Youth National Championships are Ireland’s largest Youth regatta and our sport’s primary talent spotting event of the year. All the young sailors that are competing over the weekend have every chance of being selected for the Irish Sailing Academy. Sailors who demonstrate their proficiency at these championships can be chosen for squads that will be competing abroad and may even give something back by coaching and training others as well”.

Finn Lynch, just back from placing 4th in the Laser Class at the Trofeo Princesa Sofia in Palma said “I’ve great memories of the Youth Nationals, competing with my mates for the right to represent Ireland, racing was always great and competition was fierce!”.

Irish Sailing are working closely with the Royal Cork Yacht Club to ensure that we adhere to our Irish Sailing Sustainability standards to be green and keep the seas blue:https://www.sailing.ie/Our-Environment

Irish Sailing: The Irish Sailing Association (Irish Sailing) is the national governing body for sailing, powerboating and windsurfing in Ireland.

A lineup of evening speakers – open to all:

At 5.30pm each evening or after racing there will be a talk and Q&A session at the club with speakers who have a deep knowledge of sailing and racing. The talks are open to all sailors and parents and media.