David O’Caoimh (18) from Killiney, Dublin took the Gold Medal in the Junior Men division of the Europe Africa Wakeboard Championships last February. The Championships attracted athletes from 16 Countries and were staged at the Vaal River, near Johannesburg, in South Africa.Wakeboarding, the most rapidly growing water sport in the world, has been shortlisted for the 2020 Olympics 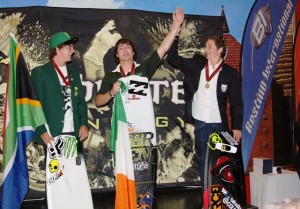 The Dublin student, who is Ireland’s National Wakeboard Champion, took on the best of Europe’s athletes to deliver a superb performance, and in the Finals he managed to beat the top riders from Switzerland, Sweden, Netherlands, Italy and South Africa.

Having taken the Silver Medal at the World Championships in Milan last August, O’Caoimh also managed to come 7th at the prestigious World Cup Stops in Borneo and China last September. The World Cup is an ‘invitation only’ event for the world’s top wakeboarding athletes, with no age categories, and attracts around 100,000 spectators at each stop.

O’Caoimh, who started water skiing at the age of five, switched to wakeboarding when he was ten, can be found practicing all year round on Lough Sillan in Cavan. A dedicated athlete, two weeks before the Championships he had to break ice to train!

Next stop for the talented youngster is the World Cup in Australia next month, followed by the US Wake Games in April. O’Caoimh is supported by the Irish Waterski and Wakeboard Federation and the Irish Sports Council. He is also extremely grateful to his sponsors Billabong, Relentless Energy Drink, Xtreme Gene, Ultrasport and O’Brien Watersports (USA).

A student at St. Andrew’s College, O’Caoimh is currently trying to combine his wakeboardingcareer with his studies as he is sitting his leaving certificate this June. He hopes to study for a B.Comm at UCD. 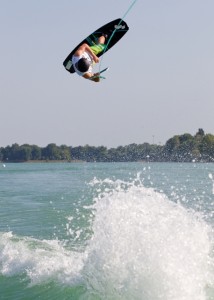 *Wakeboarding is derived from a combination of waterskiing, snowboarding and surfing. It involves the wakeboarder being towed behind a specially designed speedboat at speeds of 20 to 25 miles per hour. The rider uses the wake of the boat to perform flips, spins and combinations of both. There are an estimated 30 million active water-skiers and wakeboarders globally. Planning has just been submitted for a cable wakeboard park in the Dublin docklands which will open the sport to everyone.