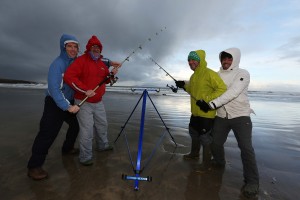 IT Sligo lecturer Kerry Larkin, Ray McDaid from Point Break Surf School and Albert Jublan and Mathieu Durand from Call of the Wild at the IT Sligo/RNLI Sea Angling Competition.

The North West of Ireland is already synonymous with some of the best surfing in Europe with surfers flocking from all over the world to take on the swell at locations like Mullaghmore, Strandhill and Rossnowlagh.

However, sea angling is fast emerging as another sport that could be championed by the region as it seeks to build on its position as a world-class water sport tourist destination.

Students studying the Bachelor of Business in Recreation and Leisure at IT Sligo hosted the inaugural IT Sligo/RNLI Sea Angling Competition at Streedagh Beach in Sligo this week with the aim of promoting sea angling and the wider north-western coastal zone.

There were more than 40 participants at the event including Fáilte Ireland, Inland Fisheries Ireland, the RNLI and a range of local sea angling providers.  MV Spirit, a local marine leisure charter boat business, won first place and took home the perpetual trophy and tuition and judging was provided by Sligo Sea Shore Angling.

IT Sligo Recreation and Leisure lecturer Kerry Larkin said there’s ‘massive potential’ in the development of sea angling and other water based sports along the northwest coastal zone; “We’ve seen how surfing has attracted people from all over the world to this coast, and sea angling can do the same,” he said. “The competition was organised to show how accessible an activity it is and to showcase the fantastic resource we have in the coast.”

Bryan Ward, the Angling Information Officer with Inland Fisheries Ireland said there is ‘huge potential’ for growth in sea angling tourism; “Because licences aren’t required, it’s a very accessible activity and there’s an abundance of species on the northwest coastal shore,” he said. “We’ve seen a huge increase in people taking part in it in the South West coast in the last five years and there’s no doubt that the North West has the potential to grow the same way.”

The coastline in the North West is undoubtedly a key attraction for visitors to the North West, according to the Head of Operations at Fáilte Ireland North West, Martina Bromley; “Sligo has real potential in terms of sea angling and angling in general, with clean waters and a wonderful resource of the Atlantic Ocean on our doorstep,” she said. “One of the most exciting projects Fáilte Ireland is working on is the Wild Atlantic Way – a tourism project that will entice the overseas visitors and holiday makers to stop off and spend more time in the region and of course participate in some fishing when they are here. Angling in such pristine conditions is a real asset for Sligo and has great appeal to visitors.”

Proceeds from the competition will go towards the local RNLI organisation. For more information on IT Sligo’s BA in Recreation and Leisure see www.itsligo.ie