Today was the final day of 2013 Mirror World Sailing Championships on Lough Derg, Co. Tipperary and it was all still to play for. Two boats were still in with a shout and separated by just three points; Ryan & Michaela Robinson from South Africa and Ridgely Ballardes & Rommel Chavez from the Philippines with the Robinsons holding a few more aces due to better discards. 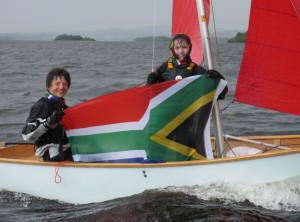 A nice bright breezy morning greeted the 182 sailors with 15-18 knots when boats launched but rain with plenty of wind shifts was forecast. The fleet got away eventually on the third start, not before about eight boats had fallen foul of black flag on general recall at the second start. UK’s Robert Bellfield & Sally Lorrimer tied up but biggest casualty was Ireland’s Dougie Elmes who had been lying 5th overall. Middle of line looked most favoured before the fleet  moved to left side of course up the first beat. The wind lightened and not as many white horses were evident. The first boats to show were Jeremy & Lauren Stephens from the UK,  South Africa’s Robinson & Robinson, Isabel Davies & Milly Moss and Ireland’s Shane McLoughlin & Ben Jennings. The first boat around was Ballardes & Chavez who were certainly doing all that could be asked at this stage, closely followed by Stephens & Stephens, Davies & Moss and Robinson & Robinson. McLoughlin & Jennings went round 7th with locals Alfie Wisdom & Sam Warren about 12th, ahead of Cian Hickey & Caolin Cosadell. 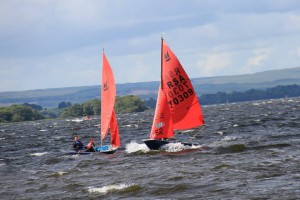 A tight situation was unfurling at top of the leader board and with the wind increasing a great spectacle with a number of capsizes. With fleet spread across the course down to bottom mark, Ballardes & Chavez were still leading but Robinson & Robinson were very much in touch around the bottom mark. The leaders initially went left but seemed to have settled on the middle, with Sarah Richards and her son George now very much in the mix. With the top three boats in the series up near the front, this race was turning into a real battle. Stephens & Stephens were now leading as they approached the weather mark for the second time, with  now in second with Katie Davies & Gemma Keers in 4th. Ballardes & Chavez seemed to have dropped back to 7th behind Hickey & Cosadell who were having a great race.

The wind picked up as the lead boats went down the close reach, with Davies & Keers broaching but making a fantastic recovery. Richards & Richards, currently 3rd overall had dropped back to about 11th. The final legs could be key to the destination of the title. If Robinson & Robinson kept a few boats between themselves and Ballardes & Chavez then it would make it very difficult for the Philippine boat. With leaders around the final mark, Stephens & Stephens held off Davies & Kerr and then Robinson & Robinson. Best of the Irish were Hickey & Cosadell in 6th.

The first attempt at Race 2 was AP’d when a huge rain cloud descended and PRO Con Murphy held off starting for five minutes. The next attempt was a black flag and general recall with four numbers on the blackboard and a few boats heading for an early bath. First to go were David Johnston & Rory McEvoy from Ireland but then as boats readied for the one minute it became apparent that Robinson & Robinson had sails down and tied up beside a support boat. They had been black flagged also. It was only when the fleet got away clear that a cheer went up on support boat behind starting line along with the South African flag. The other boat black flagged was Ballardes & Chavez and the Mirror Worlds title was heading to South Africa for the first time. The new champions Ryan and Michaela Robinson stayed around the course to watch the concluding race.

That battle down the final stretch gave runner up spot to Sarah Richards and her son George with two other UK boats filling 3rd; Katie Davies & Gemma Keers and Isabel Davies & Milly Moss in 4th, Ridegly Ballardes and  Rommel Chavez from the Philippines took 5th. Then top Irish boat was Dougie Elmes & Scott Levie in 6th after a great series that included two race wins with Alfie Wisdom and Sam Warren in 10th making it two Irish boats in Top 10.