Dedicated lifesavers of all ages from Dublin city have been making big waves at a major international swimming event in England where they achieved a string of top times and took home 18 medals.
St John Berchman’s Lifeguard Club proved itself amongst the best in Britain and Ireland at the prestigious Royal Life Saving Society’s (RLSS) international speed championships at the Ponds Forge International 50-metre pool in Sheffield last weekend. 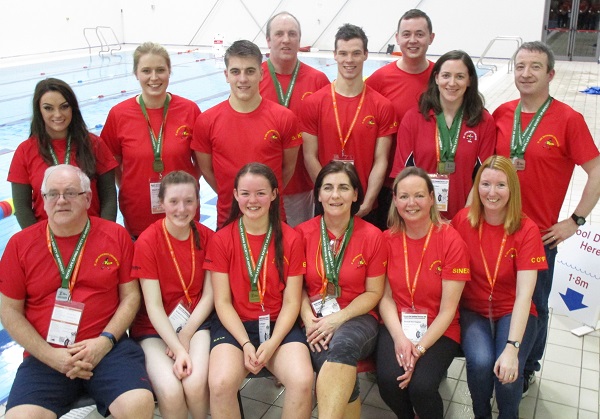 Swimming, lifeguard and surfing clubs from England, Scotland, Wales and Ireland took part in the championships, which bring together the best and fastest volunteer lifesavers. Twenty competitors from the lifesaving section of the 150-member Dublin club took part in the event, which was organised by the RLSS, an international charity dedicated to drowning prevention worldwide.
St John Berchman’s Lifeguard Club was established in 1974 to provide training for local young people looking for lifeguard jobs in the leisure industry, as well as learning valuable life skills such as swimming and first aid. The club soon expanded to include a competitive section and swimming instruction for local children. Between June and September each year, members give up their time to run outdoor lifesaving classes at North Dublin beaches.
The RLSS speed championships involve young and old lifesavers competing in a number of disciplines and distances, including obstacle races, rescues using life saving equipment, rope throwing and carrying manikins filled with water to simulate adult casualties. The events are based on real lifeguard techniques such as using rescue equipment, and the sport of Life Saving is recognised by the International Olympic Committee.
Winners of gold medals included and Paddy Kelly and David Browne in the Individual Line Throw, Patricia Kelly and Laura Mulhair in the equivalent ladies’ event, and the ladies team of Laura Mulhair, Michelle Butler, Niamh Ronan and Eva Harrington won the rescue rope-throw relay event, setting a British record in the process.
The club’s Director of Swimming, Sheila Mulhair, said: “Lifesaving Sport is a great way of ensuring that the Nation’s lifeguards keep up their fitness during the winter months, in readiness for taking up duties on the beaches later in the year. This year was one of our best performances at the international speed championships and everyone was totally elated, although the swimmers came back very tired from a really hectic weekend. It was amazing to see them do so well, with personal bests recorded in several events, and so many medals for the club. Other team members included Noel Mulhair, Sinead Harrington, June and Sarah O’Flaherty, Niall & Donal McLarnon, Alannah and Robyn Drumm, Shane Kelly, Eoghan Heeney, Cillian Spain and Naoise and Fiachra O’Nuallain.
Sheila added: “You hear a lot these days about kids sitting at computers or hanging around the streets, but these kids train several times each week as lifesavers.
“The Sheffield event brings together the very best young (and not-so-young) lifesavers, and there were over five hundred competitors from Ireland, England and Scotland and Wales. It was a great chance to show other clubs what we can do. A number of our swimmers achieved qualifying times for the European Championships, which take place in Belgium in September.”
Other Irish clubs represented included Poseidon Swimming Club from Co. Wicklow, and the overall championship was won by Olympia Life Saving Club from Belfast.

← Waterways Ireland 2017 Event Programme is Open to Applications
Three quarters of Ireland’s bathing waters are ‘Excellent’ quality for third year in a row; six beaches fail to make the grade →