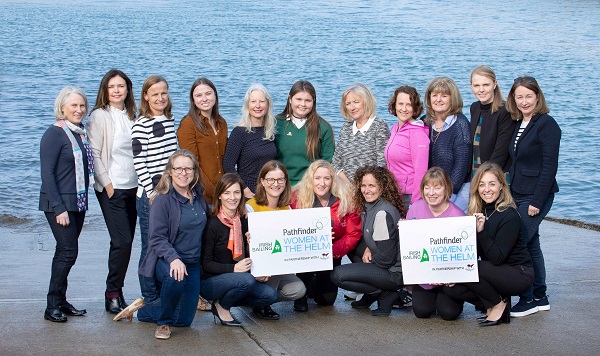 Pictured at the launch of the inaugural Pathfinder Women at the Helm Regatta which takes place on 17th and 18th August at the National Yacht Club in Dun Laoghaire, Co Dublin were some of the competitors alongside the sponsors and organisers of the event. Image from Peter Houlihan Photography

Women are being encouraged to get involved in sailing and develop skills that will help them in all walks of life at a unique regatta where all of the boats must have female captains.

Hosted by Irish Sailing, the inaugural Pathfinder Women at the Helm Regatta takes place on 17th and 18th August at the National Yacht Club in Dun Laoghaire, Co Dublin.

Sailing is almost unique amongst Irish sports in that from a very young age boys and girls compete in similar numbers against each other on the water. Like many sports, however, sailing suffers with significant reduction in female participation when women start to focus on career or family. Women at the Helm is designed to encourage women back to sailing, and by focussing on them helming (captaining) the boat, simultaneously encourage them into positions of leadership.

Event organiser, Gail MacAllister, of Irish Sailing, said: “Women and men have been sailing against each other for decades, but this is the first time a regatta will be held at a national level where there will be women only captains. While there is already equality in the sport, this regatta is about encouraging women to step into positions of leadership and give them the confidence to come back.

“Like the 20×20 campaign says, this is about seeing it and being it – if women see other women helming and leading, the path is trodden and easier to follow.”

Women at the Helm will feature two days of racing across a range of boat classes. Angela Heath, who 30 years ago was part of the first all-female team to sail around the world, will helm the boat ‘Crazy Horse’ in the regatta. The Dun Laoghaire sailor was the only Irish crew member on the ‘Maiden’ when it competed in the challenging Whitbread Round the World race in 1989-1990.

Speaking about the event, the pioneering sailor said: “I’m excited about the Women at the Helm regatta. I want to encourage as many girls and women into sailing – it’s such a fantastic sport and I’ve learned so much from sailing over the years”.

Women at the Helm is open to both male and female sailors, although women must make up at least 50% of all crews and every boast must be helmed by women. To date, more than 40 boats have been entered into the regatta, ranging from small one-woman dinghies (Lasers) to larger keelboats with crews of seven, and everything in between.

Organisers say that sailing and taking leadership roles, such as helming, within a crew has far reaching effects and benefits for all involved.

Gail MacAllister said: “Aside from the obvious health benefits sailing offers, participants in an event like this must learn to work not only as individuals with roles and responsibilities but also as part of a team. They have to analysis situations, work solutions, form opinions and ultimately, for the helm, make decisions. Most sailors will tell you that these communication and decision-making skills developed on the water translate into both their personal and work lives. In fact, some will claim that these attributes have has a very positive effect on their careers.”

The event is supported by Pathfinder, specialist change management consultants. Sara Davidson, Marketing Director of Pathfinder, said: “Pathfinder are proud to be advocates of diversity and high performing teams, and in partnering with Irish Sailing, we are helping to bring these beliefs from our work to the water”.

Irish Sailing are proud to support the 20×20 campaign, and this regatta is part of the movement to change the perception of girls and women in sport through increased visibility and participation. We hope that this event will go some way to highlight this.

Anyone interested in participating in the Women at the Helm should visit regatta should visit www.sailing.ie for more information.

← Small numbers of salmon showing signs of bleeding and skin ulceration as they return to Irish rivers
Join Clean Coasts for World Ocean Day this year & have your say on how to protect it! →