The IWAI National Council hears the details of the impact the current proposals for Canal Bye-laws will have on boating traffic on the Grand and Royal Canals and the River Barrow.
Carmel Meegan, President of the Inland Waterways Association of Ireland (IWAI) welcomed delegates to the IWAI National Council meeting in Tullamore on 8th March. The meeting confirmed that the proposed bye-laws do not put user requirements, local communities or tourism at the centre of the regulations. Delegates heard –

In general –
•       there are reports that boats present this time last year have now left the Canals – the IWAI says this is indicative of boaters’ fears and a further future drop in navigation use
•       Waterways Ireland have suggested that the 1800 plus submissions delivered by IWAI – during the brief consultation period of only 21 days- are letters in support of the IWAI Submission rather than viewing these  as other individual submissions recognising the effort and concern held by wider communities
•       Waterways Ireland imposed restrictions never previously invoked on boats travelling by Canal to the Dublin Rally in 2014 – which is celebrating 40 years of community activity
•       the proposed toll €75 to travel between the Grand and Royal Canals is detrimental – the IWAI advises this is the now most expensive boat crossing in Europe
•       the Newcomen lifting bridge will open only 8 times this year, only 96 boats are permitted to undertake the Green & Silver route around the Grand and Royal Canals this season due to restrictions of use of the Newcomen lifting bridge, significantly curtailing the emerging ‘Green & Silver’ route – the IWAI advises this is a major miss for domestic and international boat tourism. 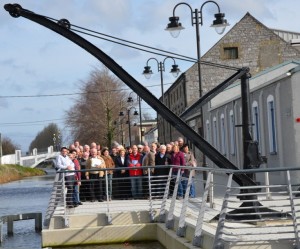 Concerns aired as to the Canals and Barrow as a tourism resource have included questions in the Seanad and the Dail; County Council input; national and local press articles; television and radio interviews; community websites; blogs and Facebook pages reflecting overall national concern.

Politically, this has grown to be a very big issue and is featuring highly as politicians face into local elections this summer. The IWAI have gained the interest of local, regional and national politicians on this matter to date, and will present our position to the Oireachtas Joint Committee on the Environment, Culture and the Gaeltacht in Leinster House on 25th March 2014.

The boating community is not averse to appropriate management, facility provision, and access to waterways. But boats are key attractions, as the lifeblood of the navigations, and need to be welcomed.

The Inland Waterways Association of Ireland (IWAI) is a voluntary body representing over two thousand enthusiasts, with 22 branches across the island of Ireland.

The Inland Waterways Association of Ireland (IWAI)  is an energetic, fun, voluntary organisation with members from all corners of the Island of Ireland, all sharing a keen and passionate enthusiasm for the waterways of Ireland.

The IWAI advocates the navigation, use, maintenance, protection, restoration and improvement of the inland waterways of Ireland. It was formed in 1954 to promote the development, use and maintenance of Ireland’s navigable rivers and canals.

When the Shannon was almost totally undeveloped for pleasure boating, the IWAI campaigned against the building of low bridges, thus ensuring the development of the river as a national asset. In the 1960s IWAI successfully fought plans to close the Circular Line of the Grand Canal in Dublin. Later the Association campaigned for the re-opening of what is now the Shannon – Erne Waterway (formerly the Ballinamore & Ballyconnell Canal) and the Naas Line of the Grand Canal.

IWAI played its part in the restoration campaign for the re-opening of the Royal Canal between Dublin and the Shannon in recent years. IWAI assistance to the campaign to re-open the Ulster Canal has also borne fruit with the announcement that work is to begin on re-opening the section from the Erne to Clones. Currently, IWAI members are active in restoration projects on the Boyne, Newry and Lagan Canals.