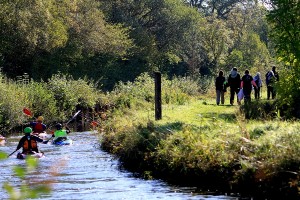 The Shannon Blueway has won Best Tourism Initiative category of the LAMA Community and Council Awards 2015 in association with IPB. Waterways Ireland who have led the development of the Shannon Blueway attended the ceremony represented by Norma Herron, with Leitrim Co Co Cathoirleach Paddy O Rourke and Chief Executive Frank Curran.

The Shannon Blueway is a multi-activity trail running alongside water, linking walking, cycling, canoeing, paddleboarding, fishing and cruising with local towns and villages.

Launched in October 2014, 1000’s of walkers, paddlers and cyclists have already enjoyed this first section of the trail from Drumshanbo to Carrick on Shannon including 16.5km of canoe trail, and 10km of approved walking route .

The Shannon Blueway is being delivered in partnership with the National Trails Office, Canoeing Union, Leitrim Co Co and Leitrim Tourism and is being marketed under the Blueways Ireland Banner and can be found on the web, Facebook and Twitter. 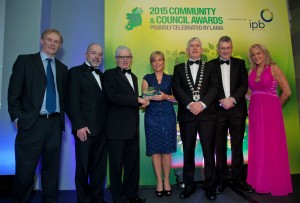 Attending the Holiday World Show Dublin this weekend promoting the Shannon Blueway with special offers for the Mid-Term the response from visitors was excellent.

The Shannon Blueway is already growing, with new sections to be opened later this year on the Camlin River.

Leitrim, Roscommon and Cavan have many kilometres of walking trails, looped, linear, long and short distance, all linked by one thing – the waterways. There are over 100km of water trails radiating from Carrick-on-Shannon which link these existing walking trails and to which Waterways Ireland has added National Loop Walking Trails along the Lough Allen Canal in partnership with Failte Ireland and Leitrim County Council.  There are three loops between Battlebridge and Drumhauver;

The Blueway builds on the huge potential provided by the existing waterway infrastructure. The potential is enhanced by the geography of the area offering hugely attractive rural towns and villages, such as Drumshanbo, Leitrim Village, Carrick-on-Shannon, Dromod and many others, closely located along the waterway that provide natural achievable looped trails, three heritage trails  and access to the long distance routes of the Miners Way and the Leitrim Way. They are immensely attractive for short duration activity breaks.   The Blueway will enhance the choice available for visitor experience with the option of coming for an extended period to cruise the waterway or coming for a half day canoeing, cycling or walking break or any combination of activities. The new Shannon Blueway will offer a wide range of affordable pursuits in a safe family friendly environment.

The existing providers of commercial and recreation services in the region already recognise the significant opportunity the Shannon Blueway presents. Three new providers have opened in recent months.

The canoe trail is founded on existing Waterways Ireland facilities and services. Waterways Ireland has invested funding in renewing the jetties and approach ramp at Acres Lake, adding the necessary infrastructure for the canoe trail:  with accessible access and egress points suitable for easy access of all canoes and paddle board types at the head of the trail and at the three locks along the canal.

Waterways Ireland and Leitrim Co Co will shortly be looking at providing a connection from the jetties at Acres Lake to the canal towpaths and also seeking to complete walking/cycling connection to Carrick-on-Shannon, particularly facilitating access to the main accommodation providers to attract visiting groups and clubs.

Initially the Blueway will be developed between Carrick on Shannon and Drumshanbo but it is hoped to extend towards Lough Key and Boyle on the west, down the Shannon towards Roosky and east to connect with the Shannon Erne Waterway.